I’ve had enough of the Jungle and head to the exit. The last man I speak to is an Afghan who runs one of the restaurants on ‘main street’. He’s trying to convince me to come in on my way out, but I have to get back to Calais to catch my train to Paris. ‘You are too smiley to be French’ he teases, and when I say I’m from Australia he begins chattering away excitedly. He knows someone on Manus Island, and he has a lot of questions of the non-rhetorical kind.

My heart sinks to my feet and I want to run and hide and vomit. I thought about the possibility of this happening when I left for Athens, but assured myself the numbers were so large the chance of it occurring was miniscule. There are over a million refugees entering Europe this year alone, and only a few thousand that have tried to get to Australia, what are the chances? Yet here I am, literally about to escape the jungle myself when it happens. It’s all very well and good to have long debates about this with volunteers and workers in cafes after a shit day, but I don’t want to stand here and explain my country’s wicked policy to this man who has nothing and knows someone who is directly suffering from it. Why didn’t I say I was a Kiwi. I seriously consider feigning ignorance and just telling him about my neighbour who came from Afghanistan in the 80s and loves Australia and says he’s never had any problems. But I’ve clearly stood there like a mute idiot for too long because he can tell I know what he’s asking about. 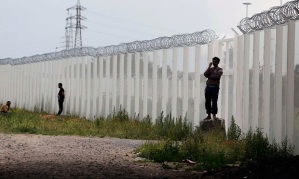 Yes, it’s true they can’t leave I say. Yes, it’s true that PNG is not processing their claims even though they’ve been submitted. Yes, it’s true that the Australian government funds the whole thing. Yes, the navy does physically tow them out to sea. Yes, it’s true that people have died, some because they were denied medical care. He tells me his friend said the food was inedible and the guards beat them, then gestures to his restaurant and laughs, ‘at least we make good food!’. Thankfully there are some questions I genuinely don’t have a firm answer to, like if it’s as dirty as the Jungle, or if people have access to better services. Though all reports would suggest the answers to those questions are yes and no, I’m not lying when I say I haven’t seen it. Thank Christ. I’ve been struggling enough with the Jungle in France, I don’t think my soul could handle Australian supported gulags.

The man thanks me earnestly and I’m very confused as to why. ‘You explain me, here is not the worst’ he says. And I realise I’ve given him a gift. The gift that somewhere on a pacific island in the middle of nowhere, surrounded by real jungle, there are people who are treated even more poorly than him. People who are worse off and less human. People who also live in the mud and swamp but are imprisoned. This man, at least, has his agency. He can walk out the door if he wants. What a way to help someone. Maybe I’ll go and find Mimi and tell her about the Somali woman we allowed to be raped, denied immediate emergency health care to, and then flew around the pacific like a ping pong ball so she couldn’t access the courts.

When I get to the exit near the Banksy the mood in the camp has quickly turned and suddenly 7 police vans screech around the corner, riot police pour out and sprint to the other side of the Jungle. There are yells and the police have their batons raised as they run. People shrink into their restaurants and tents and huts and everything goes weirdly quiet. I try and find out what’s going on, but the response I get seems to suggest that this is a relatively regular occurrence; it could be something as simple as an argument that triggers such a reaction.

I can’t wait to get away from this place. A cop stops me and asks if I’ve been taking photos and I lie and say I don’t have a camera. I don’t know why I lie; there are no photos of police on my phone or anything that is controversial. I just don’t want to do what he wants. It’s the only ‘piss off’ I can give them. As I walk onto the freeway to hitch a ride back to Calais I pull down my hoodie even though it’s raining and cold. I’m scared that unless people see my blonde hair and white skin, no one will stop to help me.