Someone does pick me up, a Belgian couple obsessed with street art who have driven down to photograph Banksy. I feel a bit guilty getting into their posh car with the mud caked all up my legs, but they don’t seem to mind. We chat a bit about the artwork, and then, revealing that he didn’t quite get Banksy’s message, the man says, ‘I just don’t understand why they have to come here’.

This is why you’re not supposed to get into cars with strangers.

‘Why don’t they stay in Turkey? Or go to India? Where they are safe?’ I relay some of the stories I’ve heard about how refugees are treated in Turkey, how some have spent years in a camp there, how India hasn’t signed the Refugee Convention so they have no rights, not even recognition as a person before the law. He nods thoughtfully and then goes on to agree that some people need help, but doesn’t understand why a doctor and his family in Kabul or Damascus would leave. I say that I think the Taliban, ISIS and co don’t distinguish between middle class professionals and otherwise. That often in these situations it’s the educated who are most targeted. The woman agrees with me and says that we must help them, though she doesn’t particularly want more in Belgium because the government gives them money and some of them don’t have jobs after ten years.

I really don’t know why the universe is doing this to me when I voluntarily returned to the jungle. Surely it should have been Angelina Jolie or Justin Trudeu who stopped to give me a lift.

‘I just don’t think that’s true’ I say. Every refugee I met is so eager to study and work and expresses disdain at the idea of charity. They were all willing to do anything to start an independent life. Not like so many Europeans I meet who would rather live off their parents than work in a restaurant because they believe they’re above that. And considering so many people here think such labor is beneath them, I’m not sure who else they’d get to serve them if they kick out immigrants.

The guy admits he doesn’t know much about it, and contends that Syria is obviously at war, but questions why people in Afghanistan are coming now. I can hear the resignation in my voice when I talk about the Taliban strengthening since 2014 and relay the stories of how many Afghan’s told me they would rather be shot than sent back. That the war in Afghanistan has stretched well beyond a decade.

The woman, who I had concluded was the smart one, then says that she hasn’t made up her mind yet whether she is ‘pro’ or ‘anti’ refugee, as if it were an issue like raising the VAT. The guy then adds that we shouldn’t help the ‘economic migrants’. I’m having flashbacks to painful moments in South Africa when I accepted rides from people who turned out to be raging racists and then ended up with a choice between being stuck or abandoned alone on a hwy. Thankfully, we are almost in Calais and if I’m thrown out now and have to walk I’ll still probably make my train.

This couple is not mean. They express real regret that Le Pen has gathered so much support in France and bemoan the right wing in Belgium. They feel bad that there are people living in the Jungle. And they do think we should do something to help. But the ignorance is astounding. The suggestion of sending people to the rich Gulf States is brought up. I can’t hide my disdain when I say I don’t think it would be fair to send an educated professional woman from Damascus to Saudi Arabia. Or a secular young man from Iraq for that matter. I can hear the condescension in my voice when I point out that all Muslims are not the same, but I just don’t care anymore.

They cheerily drop me off, wish me well and joke about how nice it will be to go back to their warm apartment after seeing the Jungle. Even though all they did was stand at the entrance and photograph Banksy. 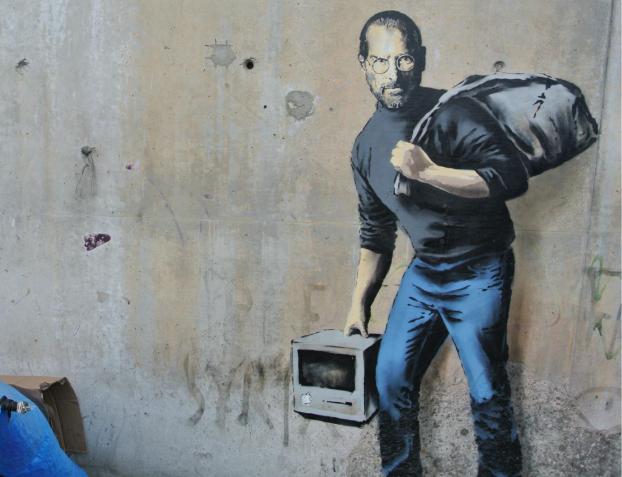