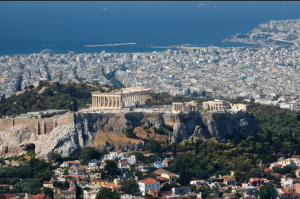 It’s been three and half years since I was last in Athens and the city is still incredibly rundown. Greece has generally not been a final destination country for asylum seekers.  Although the Dublin Accord states that refugees entering the EU should be processed in the country in which they enter, the European Court has found member countries in breach of the ECHR for sending asylum seekers back to Greece due to the risk they face of cruel treatment. While Greece and Italy act as a ‘frontline’, refugees tend to move on very quickly. In reality, most of the people I meet will spend very little time in Greece.

Nowhere is this more evident than the 2004 Olympic Galatsi Stadium.

Last month it was repurposed as a holding centre for refugees coming off the island ferries before they head further north.  The centre is organised by the municipality, run by the vice-mayor and supported entirely by donations. Since October 1st 15 000 people have passed through the emergency centre.

It didn’t take long for me to be confronted. On the bus to the stadium I encountered a group of young Afghans and their kids. In an effort to break the ice I made it my mission to get a laugh out of the little girl propped up next to me. After pulling numerous faces and bribing her with nuts to no avail I looked at her more closely and was haunted by the emptiness in her expression. Despite her dad’s best efforts to get her to react, she had no spirit left in her. And it hit me; this child was nothing like the poor kids in Africa I’d known, who had so little but still so much life in them that a funny noise or a lolly could fill them with glee. This little girl was completely traumatised. It wouldn’t have made a difference if I morphed into Dora the Explorer and produced a truck full of candy, at the age of 3 or 4, she had no smile left in her eyes.

The adults travelling with her were not faring much better. One of them, Taaban, spoke impeccable English and told me their story. He had left Afghanistan about a month earlier and had travelled through Iran, Pakistan and Turkey before arriving in Greece the previous day. Tabaan fixed cell phones in a city 200kms outside of Kabul. It was his dream to open the first Apple store in Afghanistan. At the age of 14 he needed to get a job to support his family, so he taught himself English, first from a book and then by speaking to US soldiers stationed in the country. He is now 22 and tells me that his father decided someone had to get out. The family sold everything they had, including Tabaan’s small market, and he left with a grand total of 3000Eu. When I ask him if he would ever want to return to Afghanistan he looks me straight in the eye and says without blinking; ‘Of course, everyone would like to be where they are from’. But the Taliban were returning to his village, ISIS is an increasing threat, and as the male of the household the responsibility fell on him to go. All he is focused on now is finding work to send money home to his family.

It seems like a heavy burden for a 22 year old. When I ask him how long he plans to spend at the stadium he says he hopes to move on that night. This all seems a bit much to someone who feels like she needs a nap from getting up at 5am once. Tabaan lost his birth certificate when one of his backpacks disappeared somewhere between Pakistan and Turkey. After paying a smuggler 500Euro to cross the Mediterranean in an 8m boat with 40 people, he only has 900 of the 3000Eu left. But he is surprisingly calm, and tells me he still wants to get to San Francisco so he can pitch his idea about an Apple store in Kabul. Other than talking about his family, the only time his voice falters is when he mentions how they were treated like animals by soldiers in Iran and the boat journey from Turkey. I make the dumb observation that it must have been terrifying for the kids. ‘None of us had seen the ocean’ he replies, ‘It was terrifying for me.’

How long do you stay in a situation when there is no future? The war in Afghanistan has lasted longer than both world wars combined. At what point does it stop being about not wanting to die, and become a question of wanting to live? This man speaks three languages, was profusely apologetic for having to ask me my name a second time, and before sitting down to eat his first hot meal in three days was asking the volunteers what he could do to help. Not once did he even hint at asking me for anything.

When we arrive at the camp a security guard checks their papers and I see firsthand the overwhelming panic in one of their eyes when he realises his documents are missing. It’s that feeling you get when you go to pay for something and can’t find your wallet for an instant, multiplied by a million. He will have to go back into town and reregister with the police that night. The camp atmosphere is overwhelmingly welcoming. The first things we see as we walk through the gates are kids playing soccer and giant finger paintings on the walls. The vice-mayor, Manos Elefthariou, comes out to give me a tour. At its fullest the stadium housed more than a thousand, but due to a strike and a bottle neck on the islands, today there are less than 100 people here. All that is about to change however as the staff are preparing for a mass influx tonight.

Manos is incredibly proud of the place, and rightfully so. It is impeccably clean. The former badminton and table tennis halls are now sleeping rooms full of blankets and toys. There is a fully equipped medical centre, and more clothes than a St Vinnies. It is absolutely astonishing that all this has come from donations. When I ask Manos about initial reactions he says the community was at first fearful, but it didn’t take long for such fears to be quelled when the locals interacted with the refugees. The stadium now has more supplies than it needs and has stopped accepting donations. Refugees typically spend 2 days here to recuperate before they move north.  Of the 15 000 who have passed through, not one has sought asylum in Greece, acutely aware that there is no future for them here.  Manos tells me that they are well informed and very well organised, that they are risking everything to have a shot at a proper life and don’t want to be dependent on charity. While you can see the relief on their faces that they are now in Europe, offers of free temporary lodging in Greece have even been refused, as they want some kind of end to their plight- a job, a life, an education, a future for their children. While I marvel at what he’s done in meeting these peoples survival needs, he is forceful in his belief that it is nothing but what is required. He struggles for the words to describe what he wants to express in his native tongue, ‘They are our fellow human beings, they are our colleagues.’ I try to play devil’s advocate and point out the age old arguments about how they were not persecuted in Turkey. He doesn’t engage with pointing out the flaws in that thesis, but just poses the question, ‘What would you do?’ It is telling that the people who are the most open and accepting of refugees are the ones who spend the most time with them.

Before I leave I say goodbye to Taaban and ask him how he knows the people he is travelling with. One is a friend from Afghanistan, but the family with the frozen little girl he met in Iran, and they have been together ever since. ‘It is not easy with three young children…’ he explains to me earnestly, ‘I saw they needed help…so I helped them’.