I was warned that getting into the Macedonian camps would be impossible, but I managed to walk into Tabanovste with no problems. A dirty train has just pulled up and people empty off it for the usual routine of collecting clothes and food before they walk along the tracks to cross. Eventually, despite my best efforts, some genius figures out that I am not a real refugee and I’m quickly ushered out. The camp director is not impressed that I have infiltrated his kingdom. They are terrified of journalists getting in and don’t believe that I’m not with an organisation. Arbnor asks for my passport, and as soon as he sees the coat of arms his attitude does a complete 180, ‘Kangaroo!’. Suddenly it’s very important that we become Facebook friends because he wants to come to Australia, and it’s very hard to get in he tells me. Oh what sweet irony. 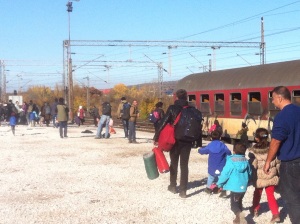 I’m offered tea and an interview. ‘I’m so sorry, I thought you were British or American.’ he chuckles, as if this explains everything. It’s not the first time that my nationality has worked in my favor like this and I take full advantage, though I’m not sure what I’m going to do when he finds me on facebook and asks for an Australian visa. The camp is calm he says because the refugees do not stay very long. FYROM has managed to implement systems to funnel people through the country as quickly as possible and refugees rarely stop. Serbia is only 500 metres away, and 3-5000 people cross here daily. Maximum capacity for overnight is 1000, though it is very difficult to imagine that many people in this space and in reality they end up sleeping outside in the dirt. Arbnor seems proud of his camp, as if it is a competition with others to see who can provide the best service. But he admits that if something happens and people were to stay longer, they would be in trouble.

Everything is fine as long as the borders stay open and people can move on. It is easy to see how quickly this could turn into a full sale disaster if that changes though; basic infrastructure is lacking, and the only thing that allows the system to do anything resembling work is the constant onward movement. Many commentators have predicted that border closures further north could have catastrophic effects on the region which already suffers from its own ethnic and religious tensions. 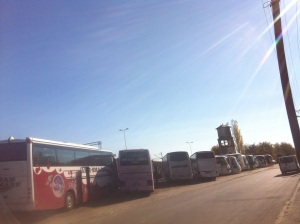 The taxi drivers of Macedonia seem like a bit of a mafia, and it’s amazing how much money is being made. Refugees have injected millions into the economy through transport, small goods, and even accommodation for the wealthier ones. Crossing the state is at least 100 euro per car, and drivers make the trip three times a day, in a country where the average income is not much more than 300Eu a month. All the drivers I interact with are incredibly sympathetic. ‘We do what we can’ I see them buy water and coffee for the refugees. They hide children in their cars from the police and get angry when discussing how the authorities are corrupt and take money from these poor people. As Vladmir who drove me into Skopje and used to serve In the Yugoslav army points out, Europe’s last refuge crisis was a result of war in the Balkans, and people genuinely seem to want to help. ‘You are 18, 19, still really a child, and you wake up and your life is gone… things you can see, you can never unsee.’ They set up their phones as hot spots so the refugees can contact home, and they provide hugely important information on where they are going and what to expect that I haven’t seen given anywhere else so far. Perhaps most significantly, they treat the refugees as equals and talk to them about their families and their stories. There is no class structure in these cars.

Until June this year Macedonian law actually imprisoned taxis for taking irregular entrants to the Serbian border. Several are currently serving gaol terms for this offence. I hear one story of a driver who picked up a German girl and her black boyfriend, and felt sick about it but asked to see their papers. Vladmir looks ashamed to be telling me this, but says he couldn’t risk a gaol sentence and felt he didn’t have any choice. Understandably the couple were furious and walked away.

He encourages one group to seek asylum in Macedonia. Proving that a huge problem in this situation is a lack of communication, the refugees reveal that they don’t know about procedures here and are heading to countries where they believe they will get papers easily. They are also concerned with being in large countries where there are Arab-speaking communities. A fact that would have the far right screaming with cries of ghetto, it is really just a desire to feel a part of a community. To speak your mother tongue, to laugh and talk with those who share your history. It is no different from Chinatown or Little Italy. It is no different from me being drawn to an Aussie in Paris. None of them want to accept charity. When those who are used to money find out how much people in Macedonia earn they are quickly turned off, and encourage the taxi driver to come with them to Germany. 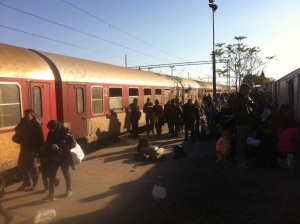 It is true that a small number of these people are not only running from bombs, one group crossed through the other day from Puerto Rico, another from the Dominican Republic, which seems amazing to me because surely there is an easier way to get to Europe from the Americas than via Greece by Turkish smugglers. My Yugoslav army friend says that there are those taking advantage of the situation. He doesn’t hold it against them though, and seems very wise in his comments that it is human nature to always search for a better life. As long as the refuges keep moving and injecting millions into the FYROM economy I really don’t think that anyone here minds. However, I am given the distinct impression though that benevolence would quickly disappear if all these people stopped moving and decided to settle in Skopje.